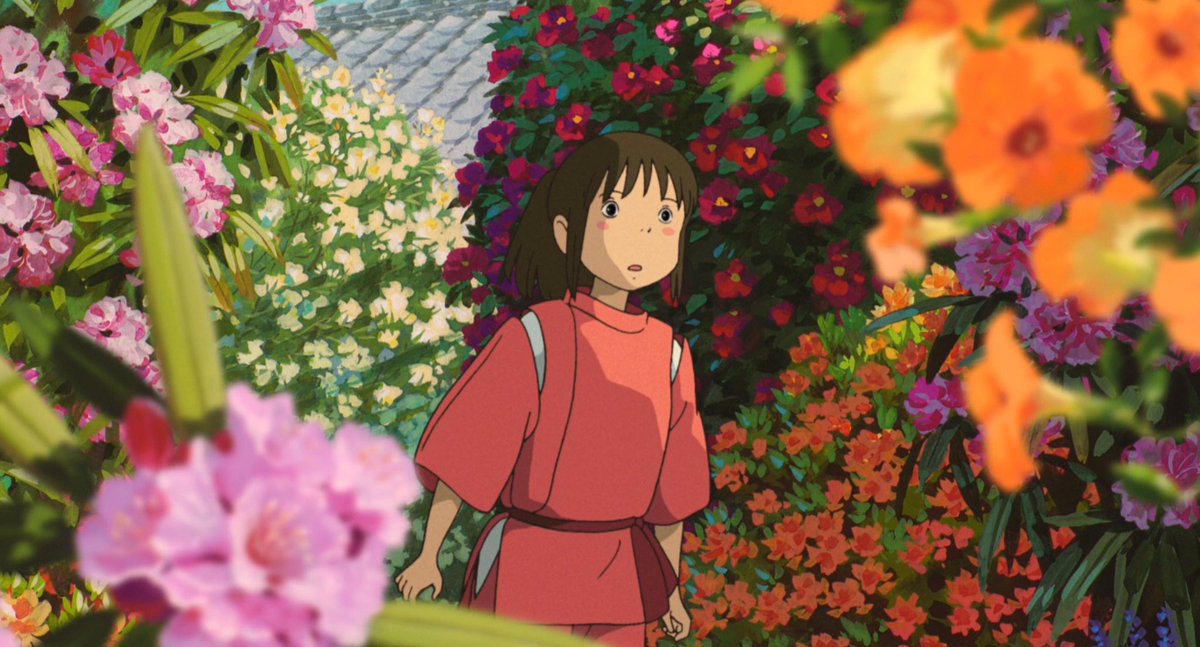 “Once you do something, you never forget. Even if you can’t remember.”

Here’s another animated classic from Japan’s Studio Ghibli, a film which recently celebrated its 20th anniversary.

The timid ten-year-old Chihiro is not happy about having to move, and is further frustrated when, while trying to take a shortcut to their new home, her parents decide to stop the car and explore what looks like an abandoned village. They soon find a buffet and begin chowing down on a small feast, unable to resist. Chihiro tries to warn them that they’ll get in trouble, but they ignore her, so she wanders off by herself.

When the sun goes down, Chihiro returns to find that her parents have turned into pigs, and that she herself is now trapped in a spirit world, where humans are unwanted. If she ever wants to see her parents again and escape the spirit realm, she’ll have to survive among the spirits for a while.

Finding a job at a bathhouse, Chihiro does her best to clean the baths and serve the guests, but she also finds herself unraveling the mystery of a boy named Haku. He seems to work as a henchman for the strict unpleasant owner of the bathhouse, but he occasionally goes out of his way to help Chihiro, claiming they’ve met before in the human realm. When he eventually shows up injured and close to death, Chihiro must find the courage and tenacity it will take to save him.

While the story is heavily influenced by Japanese folklore where things like rivers and forests have their own personified spirits, it also touches on universal themes such as the depravity of gluttonous consumerism and humans’ role as caretakers of the earth. Subtle but profound character development is also something director Hayao Miyazaki excels at, and viewers may notice how Chihiro’s timidity fades with her experiences in the spirit realm.

With a beautiful fantastical world, a captivating musical score, and an engaging story, it’s little wonder that this topped Japan’s highest grossing films for nearly twenty years, and remains IMDb’s highest rated animated film of all time. While the film does include a few moments of scary imagery, it is appropriate for the whole family.